And the Lord said unto the servant, "Go out into the highways and hedges, and compel them to come in, that my house may be filled." 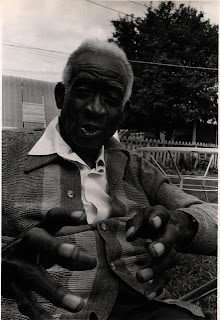 During the early 1930s, Thomas Dorsey created gospel music -- the African American religious music which married secular blues to a sacred text. Under the name “Georgia Tom” he performed with blues artist Ma Rainey and her Wild Cats Jazz Band. He wrote over 400 compositions, but it is for “Take My Hand, Precious Lord” that he is best known.

Dorsey was the son of a Baptist preacher; his mother was the church organist. Throughout his early years he felt torn between the sacred and the secular. At eleven, he left school to take a job at a local vaudeville theater. Six years later, Dorsey left Atlanta for Chicago. He was part of the Great Migration north. In Chicago, Dorsey found success almost immediately. He was known as the “whispering piano player,” called to perform at after-hours parties where the pianist had to play quietly enough to avoid drawing police attention.

At twenty-one, his hectic and unhealthy schedule led to a nervous breakdown. He convalesced back home in Atlanta. There, his mother admonished him to stop playing the blues and “ serve the Lord.” He ignored her and returned to Chicago, playing with Ma Rainey. He married his sweetheart, Nettie Harper. But in 1925, a second breakdown left Dorsey unable to play music.

After his recovery three years later, Dorsey committed himself to composing sacred music. However, mainstream churches rejected his songs. Then, in August 1932, Dorsey’s life was thrown into crisis when his wife and son died during childbirth. In his grief, he turned to the piano for comfort. The tune he wrote, “Take My Hand, Precious Lord,” came, he says, direct from God. Dorsey co-founded the National Convention of Gospel Choirs and Choruses in 1933. Six years later, he teamed with Mahalia Jackson, and the team ushered in what was known as the “Golden Age of Gospel Music.” Dorsey himself became known as the father of gospel music. He died in 1993.
Posted by Duane Brenner at 3:10 AM No comments:

The Origins of Black Gospel 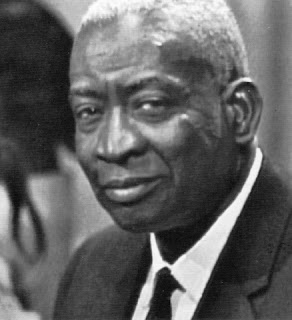 Gospel music is music that has been created to express religious belief and is characterized by the use of dominant vocals. The precise origin of gospel music lyrics is relatively unknown because the roots of gospel music are not documented well. Stories behind gospel songs weren't written down any many of the early records have been lost. Despite this, many historians believe that gospel music evolved from slaves sometime in the 18th century.

When slaves arrived from Africa they tried to maintain their culture, but were forbidden by slave owners to play African instruments. The slaves infused music and dance into their everyday tasks such as working the fields. The slaves sang songs about working hard and about God. It was at this time that the field holler was created and it encouraged others to answer and sing along.

When slavery was abolished, African-Americans slowly began to migrate north to big cities. The former slaves clung to their music and dance, but brought it indoors to the churches that they started to attend. The church soloist often sang and the choir answered in response to the soloist's questions. It was a way to celebrate God and to celebrate life.

Thomas Dorsey, an African-American musician, has been given credit for pushing gospel music to the masses in the 1930s. He was the son of a preacher and wrote many religious songs. The music that he created was exuberant and featured shouts of praise. Dorsey promoted gospel choirs and singers in venues other than churches and changed admission fees for the performance.
(More about Reverend Dorsey next time.)

Gospel music was becoming so successful that it eventually became part of the regular radio programming rotation. Gospel was not just for churches any longer. Gospel music has been credited with influencing blues and jazz music, and it is still evolving today.

Until Next Time--God Bless,
Duane
Posted by Duane Brenner at 2:08 AM No comments: 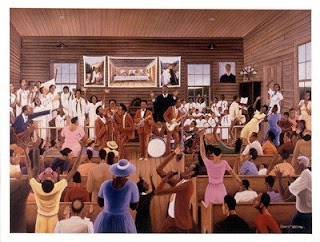 This is a painting of a typical evangelical gospel meeting. It generally involved folks getting there three hours early to cook food, set up the meeting hall, and to welcome the artists from The Gospel Highway. It was a wonderful way to extend hope and faith to these depressed communities.
Posted by Duane Brenner at 7:30 PM No comments:

Another great one leaves The Gospel Highway! Hi folks it is a sad day for The Gospel Highway. Ira Tucker, lead singer of The Dixie Hummingbirds, passed away this week of heart failure, he was 83. Born in Spartanburg, S.C., on May 17, 1925, Tucker was initiated into the world of making music and money at about age 6 after he learned to whistle, said son, Ira Tucker, Jr.

Over the years, as the popularity of the group grew, the men sang throughout the country at black churches and gospel extravaganzas and performed often at Harlem's Apollo Theater. In 1942, they sang at the Cafe Society, an integrated nightclub in New York. "Ira was really proud of the role the Dixie Hummingbirds played in overcoming social injustice and prejudice," Zolten said. "He was proud of the time spent working in Cafe Society in New York, breaking down the barriers of segregation in the 1940s."

In more recent years Tucker collaborated with Wynonna Judd on "How Great Thou Art" and recorded a country album. Tucker and the group were inducted into the Grammy Hall of Fame; and in 2007 his album "Still Keeping It Real: The Last Man Standing" was nominated for a Grammy.

In addition to his son, Tucker is survived by his wife, Louise; two daughters, Sundray Tucker of Philadelphia and Lynda Laurance of Sherman Oaks, both of whom are vocalists; five grandchildren; and six great-grandchildren.

A funeral will be held Wednesday in Philadelphia. Memorial donations can be sent to the African American Museum, 701 Arch St., Philadelphia, PA 19106.
Posted by Duane Brenner at 2:05 PM No comments:

Sorry for lack of information, I have been busy graduating from Moorpark College and finishing finals. This summer will have intermittent blurbs by myself and others who are concerned about The Gospel Highway and its preservation and place in history. We are applying for a Grammy Grant so we can archive interviews of folks that chartered this highway of faith and hope. So just be patient and more will written as i have time to write more.

I am reading the book "Remembering Jim Crow" which is part of the Duke University Behind the Veil Project. The separate but equal laws made it very hard for The Gospel Highway travelers to have any amount of dignity or self expression. These artists were taught to do what the white man said and do what he told you to do, especially the police. No African American was safe from these laws, not even the quartets of The Gospel Highway.

Mahalia Jackson once said, " I can be Queen of the stage while playing, but when we finish I still have to go back to the jungle."

Jimmy Carter of The Blind Boys of Alabama said," We just let 'em say what they wass gonna say and do what they was gonna do, cause if we fought back it would have been worser then."

Jim Crow finally left our country in 1964 thanks to the Civil Rights Act and Martin Luther King, Jr.

P.S. He can still be seen in the very rural south and some urban areas of the south- just be very careful.
Posted by Duane Brenner at 2:41 PM No comments:

The Blind Boys of Alabama...LIVE at The Belly Up Tavern

I don't want to take up too much time on this post.Iwill just let you enjoy a little of the gospel magic of The Blind Boys of Alabama.